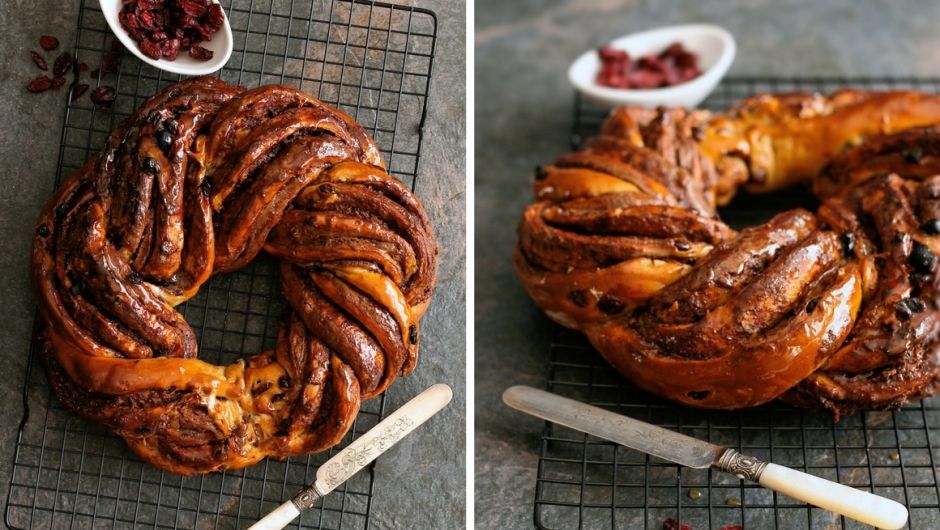 School holidays are just a hop, skip and a jump away and many of you may be thinking about how to keep the kiddos busy over the Easter break. This time last year my kids, who LOVE their hot cross buns, and I decided to make our own buns from scratch using a recipe by Jamie Oliver, and we were all pleasantly surprised by the results. I’m not sure why we were so surprised but it was probably the combination of a potentially tricky yeast dough recipe and two small children that could have gone rather wrong, but didn’t!  They were so delicious! It was also a fun baking project for the three of us…many hands make kneading a breeze after all.

Today’s chocolate hot cross bun loaf is (quite literally) a twist on that same recipe. I adapted it slightly and turned it into a decadent, rustic Easter bread layered with lashings of Nutella. It is a soft, fruity, chocolatey, sticky wreath of deliciousness that your loved ones will be sure to devour these holidays.

You can find the original Jamie Oliver hot cross bun recipe by clicking here. Next week I’ll be back with a stunning Easter main course that is ready in under an hour and will blow your socks off. Don’t miss it!

1.) Heat the milk and water together in a small saucepan until warm. You should be able to dip your fingertip into the milk without burning it. Transfer the milk to a small bowl and stir in the dry yeast. Set aside.

3.) Melt the butter. Make a well in the centre of the dry ingredients and add the melted butter, milk and yeast mixture and beaten egg. Mix together well until you have a rough dough. Dust your work surface with a little flour and turn the dough out onto the surface. Knead for 10-15 minutes until the dough is soft and springy. Place the dough in a lightly floured or oiled mixing bowl, cover with a damp tea towel and leave in warm place for one hour, or until the dough has doubled in size.

4.) Place the dough back on your floured work surface. Punch the dough down. Sprinkle raisins, cranberries and dried citrus peel over the dough then knead for a minute to incorporate.

6.) Grease and line a large baking tray. Use a sharp, floured knife to cut the log in half lengthways. Start a few centimetres from the top so that the two sections are still attached at one end. Twist the two sides over each other, then form the log into a circle on the baking tray pinching the two ends together. (See photos below.) Cover and leave for a further 30 minutes to rise. While the loaf is rising preheat your oven to 190ºC. 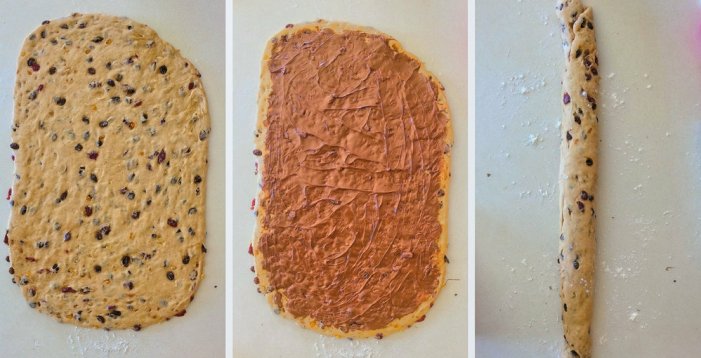 7.) Bake the loaf for 30 minutes or until cooked through. Gently warm the honey so that it is runny, then brush over the hot loaf. Leave to cool before slicing and serving.

© 2013-2021 Cupcakes and Couscous. Images and content may not be used without written permission.