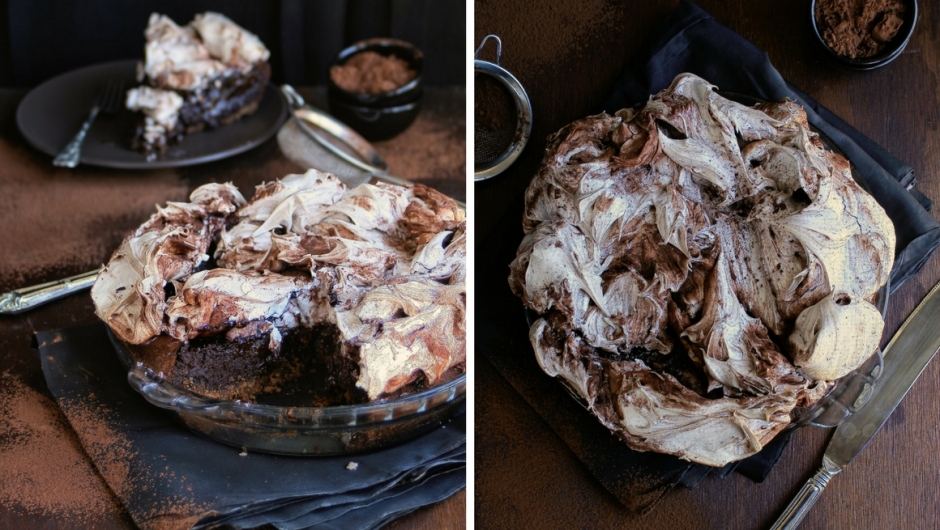 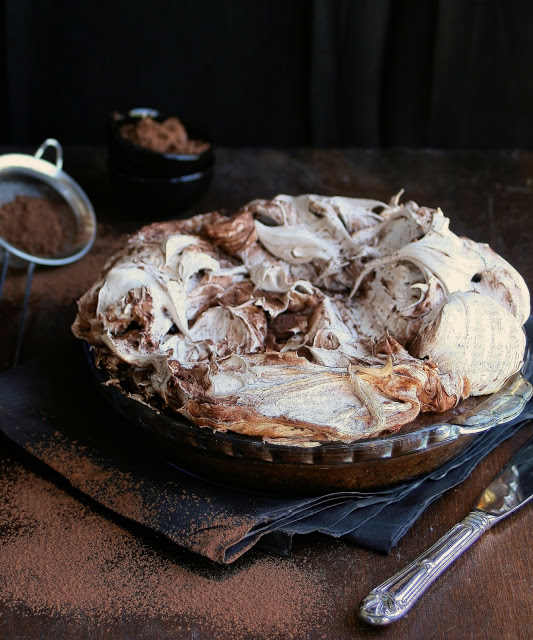 A month or two ago I was given a large bag of home grown lemons. My husband immediately requested a home made lemon meringue tart, and as it is also one of my favourites I happily obliged. While I was whisking up the meringue and lost in my own thoughts a wave of inspiration hit me – if I could make a lemon meringue pie, why not make a chocolate meringue pie? (I often have chocolate on the brain, so this sudden idea should not be too surprising.)

I basically followed the same method that I use for making my favourite lemon meringue pie, but “chocolified” it, (definitely a word, you can google it). I swopped out the regular biscuits for chocolate digestives, made a chocolate filling and stirred cocoa powder through the meringue before baking to finish it all off. Goodness gracious, it was delicious! 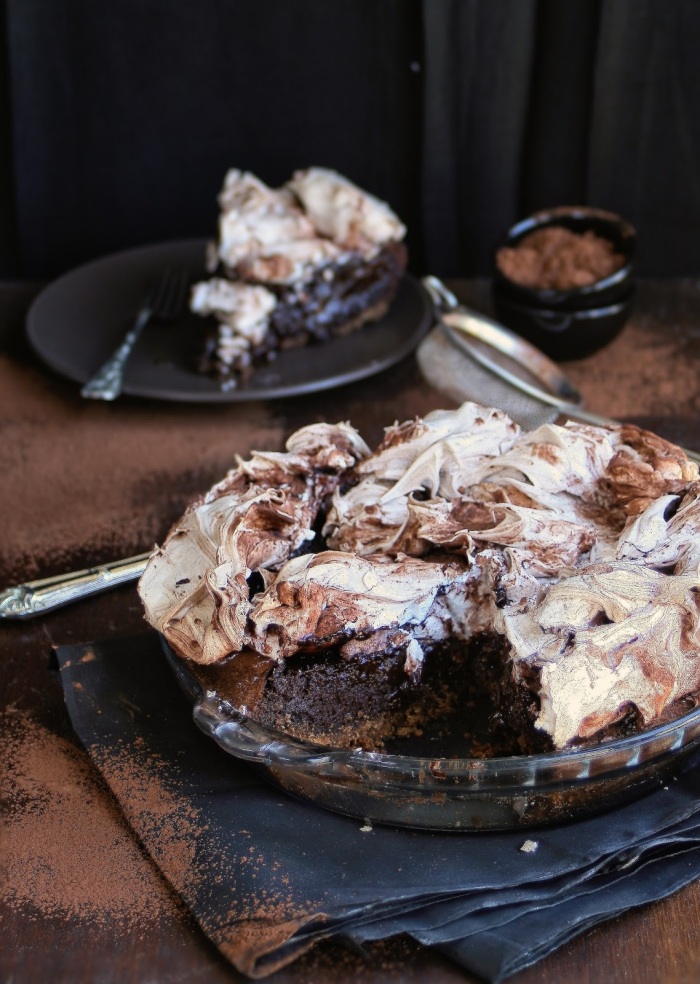 The important thing to note here is that the tart should be left to cool completely before you slice it. This allows the chocolate filling to set completely, otherwise you could have a messy time trying to lift out the slices. I do hope you love this recipe as much as we do! 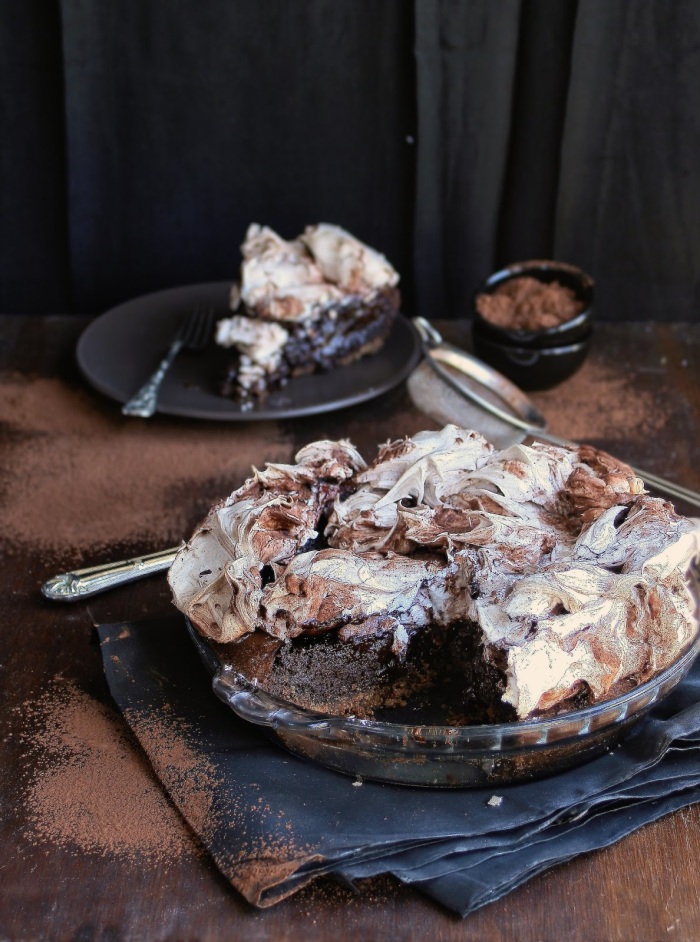 For the chocolate filling:

For the meringue topping:

1.) Grease a 20cm pie dish. Place the chocolate digestives in a ziplock bag and use a rolling pin to crush them. Tip the crumbs into a small bowl, add the melted butter and stir well. Press the biscuit mixture into the base of the dish in an even layer, then pop the dish in the fridge.

4.) While the chocolate is baking prepare the meringue topping. Whisk the egg whites until foamy. Add the salt and cream of tartar and whisk until soft peak stage. Add the castor sugar one tablespoon at a time while whisking, until it is fully incorporated and the meringue has stiff peaks. Sift the cocoa over the meringue and stir a few times (don’t overdo it!) to give a streaky effect.

5.) Pile the meringue onto the hot chocolate filling. I like to leave a bit of space around the edge to allow the meringue to spread a little. Bake for 25 minutes, the centre will be wobbly. Set aside until completely cold and the filling has set. 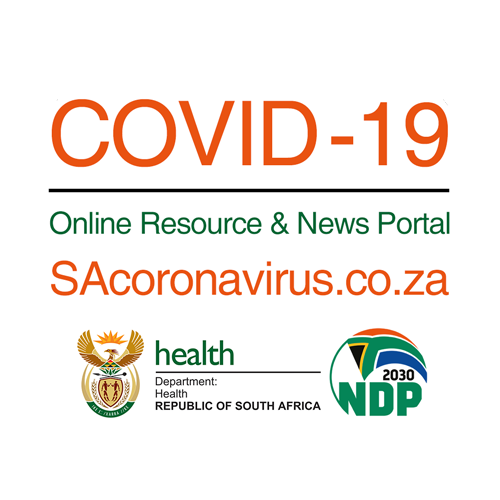 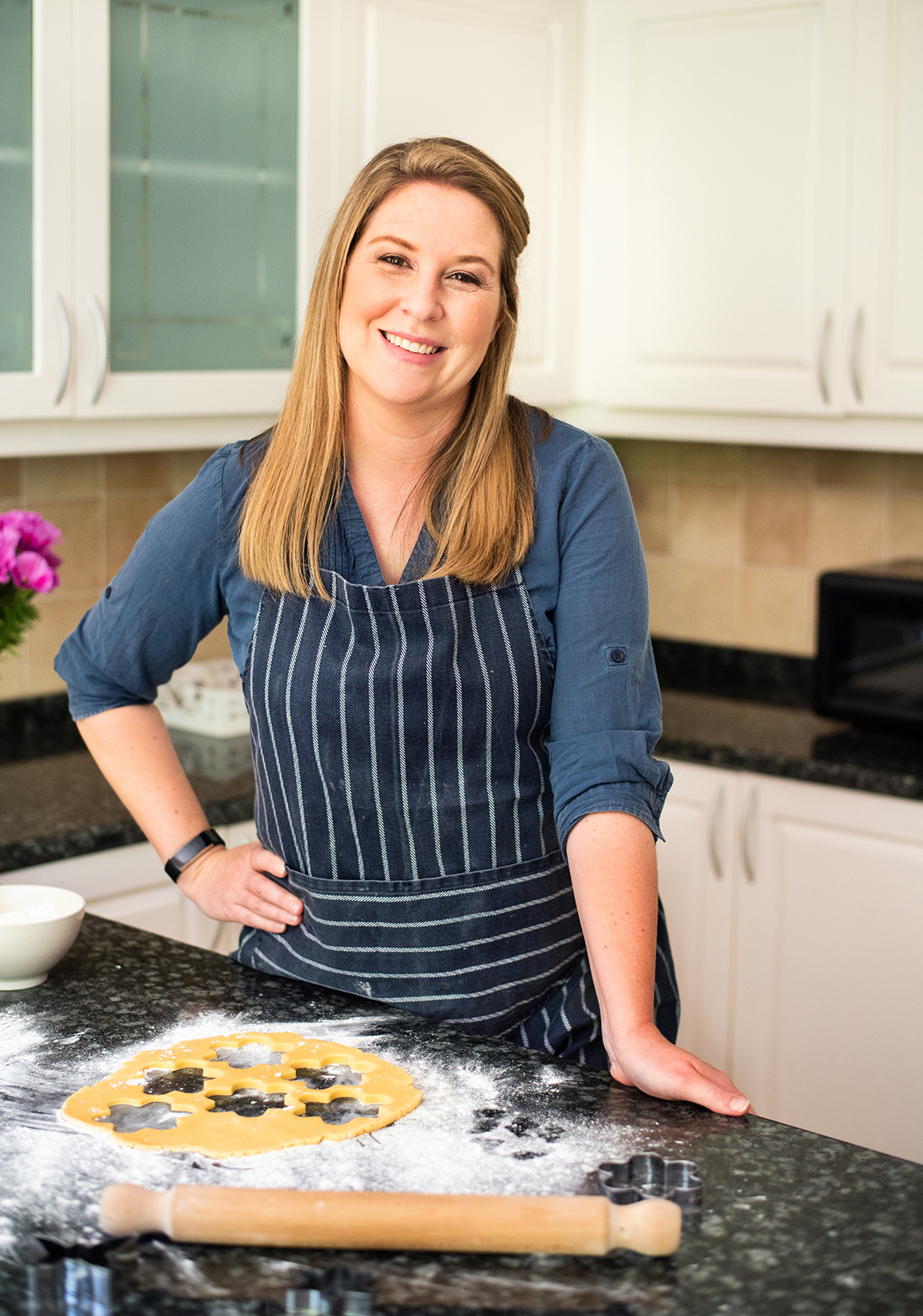 If your family is anything like mine they looove snack time, and @supamama_sa’s snack bags are perfect for portioning and storing our favourite nibbles (hello cookies!), and for snacking on-the-go. The CLICKFRESH™ double zipper seals in the freshness so our snacks are perfect when it’s time to enjoy.
Load shedding getting you down? (Oh hi stage 6 🙄.) These no-bake mini cheesecakes will cheer you up in no time. Link in bio!
Galettes are my favourite thing to bake at the moment. The buttery, flaky pastry is easy to work with, and there are so many toppings and flavours to play with. This particular one topped with caramelised onion and two cheeses is absolutely divine! You’ll find the link to the recipe in my bio.
It’s been a busy, BUSY 2 months filled with work and lots of new creations but some unexpected challenges and anxiety too, joys! With all the ups and downs I believe that there is always something to be grateful for and try to remember those good things each day.
Who loves a lazy Sunday morning? (Yes please!) @houseofyorksa breakfast trays are perfect for those lazy breakfast in bed mornings. They’re made with love by local people using locally sourced material from right here in S.A. and are available in two different finishes. If you’re still working from home you could even use your tray to hold your laptop, so you can stay warm and cosy under the duvet (I won’t tell the boss 😉). We used ours to spoil Dad with a special Father’s Day breakfast in bed.
Made some cookies, decided to shoot them. 😊 Another new recipe that I’m working on.
We’ve had this for supper a few times over the last few weeks, and if you love mushrooms as much as we do then I’m sure you’ll enjoy it too! Creamy mushroom stroganoff with buttered noodles, link in bio. 💚
The gloriously warm weather we had today inspired me to post this dessert, but honestly I would eat this dark chocolate and amaretti semifreddo any time of the year! 😉
When I lived in London I worked at a large corporate in the city with a fantastic canteen and deli. I would often have a smoked salmon and cream cheese bagel for lunch (what a treat!) and on the rare occasion when I enjoy one these days it always reminds me of that chapter. 🇬🇧 Random food memory for a Thursday. 🤣