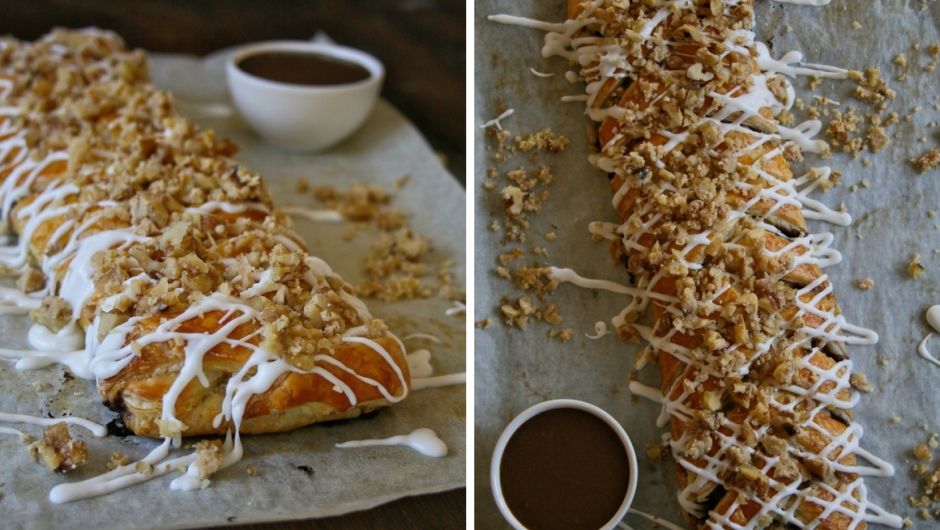 I may have overdone it this time… dieters, look away now! I was recently invited to participate in a Mystery Box Challenge, and last week when I received my hamper full of tempting ingredients from the lovely folks at Today I just had to squeeze them all into my dish. 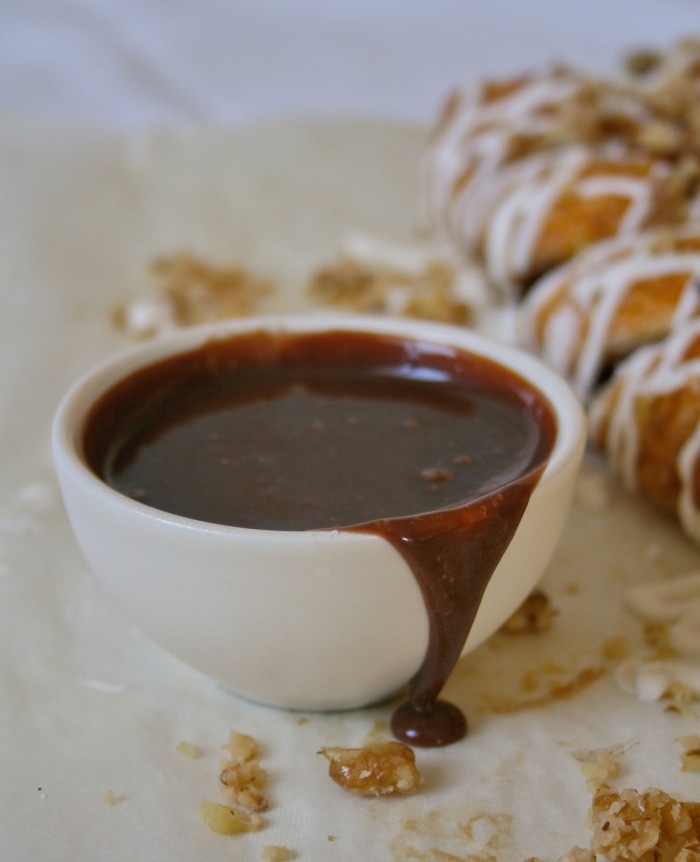 The challenge: to come up with a decadent creation using the mystery box ingredients. The ingredients: tinned peach slices, Nutella, Orley dessert topping, walnuts, icing sugar and, of course, a roll of Today puff pastry. Contestants were given the flexibility to add or remove ingredients, but I wanted to include them all in my recipe.

Peaches and chocolate is not a flavour combo I have really worked with until now, so I decided to add a little cinnamon into the mix to tie the two flavours together and was really pleased with how it tasted. There are a couple of components to my dish, but none are too taxing to make and each is also incredibly delicious on its own! Like the caramel walnuts which are dangerously moreish. Not to mention the Nutella sauce which I could not resist making, because, well, Nutella! When you are not drizzling it all over a slice of the pie you could also enjoy it on ice-cream, pancakes or any dessert really.

Cook’s tip: I followed this video tutorial to make my braid, but have also included step by step photos below.

NUTELLA AND PEACH BRAID WITH CARAMEL WALNUTS AND NUTELLA SAUCE

For the caramel walnuts:

For the Nutella sauce:

1.) Preheat your oven to 200ºC and line a baking tray with baking paper.

2.) Drain the peaches well and place in a bowl. Add the cinnamon and toss the peaches until evenly coated.

3.) Unroll the puff pastry and place on the baking tray and with one of the shorter sides closest to you. Imagine that the pastry is divided into thirds (lengthways). Cut 3cm diagonal strips into the outer thirds, I found that using a pizza cutter was the easiest if you have one. Remove the excess pieces of pastry from the top and bottom.

4.) Spread Nutella over the middle third and arrange the peach slices on top. Fold the pastry over at the top and bottom.

5.) Braid the pastry by folding the strips over the middle section, alternating between left and right until you reach the bottom. Beat the egg lightly with a fork and brush over the pastry. Bake for 35-40 minutes until the pastry has puffed up and is golden. Leave the pie to cool completely. 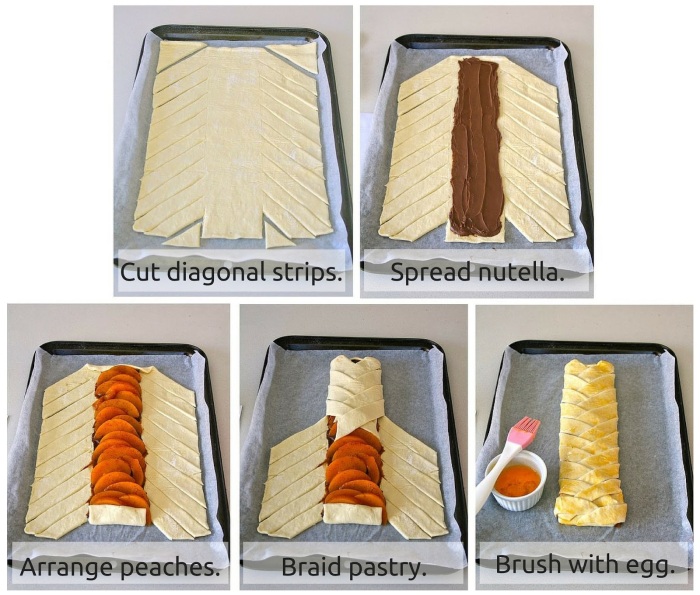 6.) Make the caramel walnuts by placing the sugar, butter and cream in a small non-stick frying pan. Stir over a low heat until the butter has melted and the sugar has dissolved. Allow the mixture to bubble gently for 2 minutes while stirring. Stir in the vanilla extract and walnuts and toss well to coat the nuts in the caramel. Transfer immediately to a piece of baking paper and spread the mixture out. Leave to cool completely then chop into rough pieces.

7.) Make the icing by mixing the icing sugar, cream and vanilla extract together until smooth.

8.) Make the Nutella sauce by placing the Nutella, cream and vanilla extract in a small saucepan. Whisk over a medium heat until the sauce is smooth and just starts to bubble. Remove from the heat.

9.) To assemble: spoon or pipe the icing over the cooled pie. Sprinkle the chopped caramel walnuts over the top and serve with lashings of Nutella sauce.

Disclaimer: I was invited to participate in the Today Puff Pastry challenge and was under no obligation to publish my recipe.

9 thoughts on “Nutella and peach braid”

© 2013-2020 Cupcakes and Couscous. Images and content may not be used without written permission.